OWNED BY THE BILLIONAIRE

I’m awake the second Brigit’s hand touches my shoulder. I’m hardly asleep, if you must know. It’s impossible to sleep. We’re ten days out from her due date and our child could be born into the world any second. Her doctor told her two weeks ago that babies run on their own schedule. Early, late, no way to know.

“Is it time?” I had fallen asleep, I suppose. The dream clings to me still. Brigit on a stretcher. Brigit being taken away from me. Brigit in a pool of blood. A nightmare. Not a fucking dream. Her face is close to mine and I search it for signs of distress. “Sweetheart, is it time?”

“I don’t want to go to the hospital,” she whispers. Her eyes are wide. The curtains over the window are pulled back. She’s been up, then. Debating whether to wake me.

I sit up on the side of the bed and pull her close. Her round belly steals her balance, so I tug her down onto my lap and hold her. Rest my hand on the curve underneath her nightgown. The baby kicks, as if she knows I’m awake now. “Hi,” I say to her, and push Brigit’s hair away from her face. “You don’t have to. Your doctor can come here. A whole team here for you.”

“The thing is.” Brigit clears her throat. “The thing is, if something happens, they have to take me there anyway. That’s how it goes. I looked it up online. I emailed Carina.” Carina Jain is a very skilled doctor and the only one I trusted to be on call for me at the whorehouse. Now she’s serving as Brigit’s OB. “If there’s an emergency, we have to go.”

“I’ll add a floor to the building, then. I’ll build a hospital here. If it’s a surgery they need—” I’ll pay whatever it costs.

“I don’t want to go back there.” Her voice rises. “It feels like bad luck. And there’s not time. You know there’s not.” Brigit’s eyes fill with tears. “It takes so much time to build anything, and she could be born any minute.”

“I can’t.” I brought her to that hospital after my sister set off bombs at the back of the whorehouse. A shard of glass cut into Brigit’s back and very nearly killed her. The baby kicks my palm again. “I want to go back to the mountain.”

We’ve only been back in the city a week. After Daisy was born, we stayed until Persephone had her feet under her and Hades started sleeping at night instead of pacing around and calling people. He’s having new guest apartments built underneath his but they’re nowhere near done. It will mean imposing on them. I don’t mind barging in now and then, but this would be an ask. It might be too much for the fragile, tentative… I don’t know what to call it, what’s happening between me and Hades. Cronos very nearly made it impossible to be brothers.

“Sweetheart, I love it there. Don’t worry about me.”

“Persephone said we could visit.”

“We can call her in the morning.”

What am I supposed to say to my very pregnant wife? That she can’t call her friend and ask to visit the mountain? There was a time when it would have been impossible to leave. I couldn’t walk away from the parties I hosted at the whorehouse. Now the women’s shelter has a night staff to help anyone who arrives after hours. It is technically possible for me to get up right now and take Brigit anywhere she wants to go.

Brigit allows me to put her on the bed, with plenty of pillows stacked behind her. I bring her the phone and she swipes at the screen with trembling hands. Dials. One ring, then two, and then a quick silence that could mean voicemail or it could mean—

“Hi, Bridge,” Persephone says. It’s so late, and so quiet, I can hear her clearly. “Are you calling with news?”

“Do you think—” Brigit takes a deep breath. “Do you think we could come back?” She gets the words out and bursts into tears. Everything is heightened for her, and I should have expected this. Brigit keeps trying to catch her breath and explain herself. She can’t do it.

I take the phone out of her hand and give her a box of tissues. Her mom’s not alive to be with her for the birth. Her dad tried to sell her off to her uncle. Poseidon dropped him on a far-off island. Hades and Persephone—and Poseidon, when he’s here—they’re all we have. It’s unbelievably heavy. I swallow my guilt and fear.

“Hey,” I say to Persephone. It’s only slightly awkward, given I did have her kidnapped and brought to the whorehouse in an attempt to smooth things over with Demeter. Needless to say, it did not work. It turns out Persephone is significantly more forgiving than her mother. “I’m sorry if we woke you.”

“No.” Brigit’s trying to get out of the bed, in fact. I help her out, an arm around her lower back, and she trails to the bathroom with the tissues dangling from her hand. It’s so fucking sad. Christ. Maybe it would be better on the mountain. “She just woke me up and said she doesn’t want to go to the hospital.”

“I’m sure she doesn’t. Bad memories.” She’s matter-of-fact about it. “You can come here, you know. Stay as long as you want.”

“Only if—” My throat goes tight, which I fucking hate. The thing about imposing is that our foster father did it all the time. He never fucking cared what other people wanted, or needed, unless he could use that information to sell women and make money. “I don’t want to overstay our welcome.”

“Can’t do that if you’re not here,” she says lightly. “When does she want to come?”

I go over to the bathroom door and lean against it. “Sweetheart. Persephone wants to know when—”

“I want to leave now,” she calls from behind the door. “I want to fly.” In one of my helicopters. It’s much faster than the train, and only takes a ten-minute drive to the airfield.

“I heard,” Persephone says. “Come. We have room. Tons of rooms. Any suite you want.”

Painful, painful. I’d rather host than be a guest. “Brigit likes the suite down by you.”

Down by Hades’ master bedroom. The guest suite is as big as his room, and I hate to admit that it’s also fucking nice.

“Okay. It’s Zeus,” she says, and then she murmurs some more to him. The conversation in cliffs note. “Hades is here. Do you want to—”

There’s a rustling static, like she’s handing off the phone. “You are a needy motherfucker,” Hades says.

“It’s not me, it’s Brigit. She’s insisting we leave now.”

“She wants to fly.” This new plan—it changes things. We have to move people. We can’t be on the mountain without a laundry list of shit they would have had at the hospital. I don’t know where to begin. I don’t know how to ask him for this. I don’t fucking know. I don’t have room to be nervous, or to lose my composure. But it is possible that I’m freaking the fuck out. It’s a mindset issue, really. “We need—” I start, and the list stalls out. “Fuck.”

“Can you fly or should I send someone?”

“I can fly. I just can’t fucking think.”

“I’ve already woken Carina Jain. The train is making a stop in the city in an hour and a half. She’ll coordinate the surgical team and the neonatal specialists. My housing for them is ready.”

“What the fuck?” I go into the walk-in closet and take out a bag. Clothes. We have to bring clothes. “How did you do that if you’re on the phone with me?”

“I’m on Persephone’s phone, jackass,” he says drily. “Stop digging through your closet. Send James to the house to pack. I’ll have a pilot go back for your things once you’re here.”

“What the fuck happened to make you so considerate, Hades? Is Persephone holding a gun to your head?”

“She would never. No, Zeus. This is because you’re my very favorite in the whole fucking world. Now get your ass to the mountain. Don’t you dare make Brigit wait.”

READ OWNED BY THE BILLIONAIRE NOW! 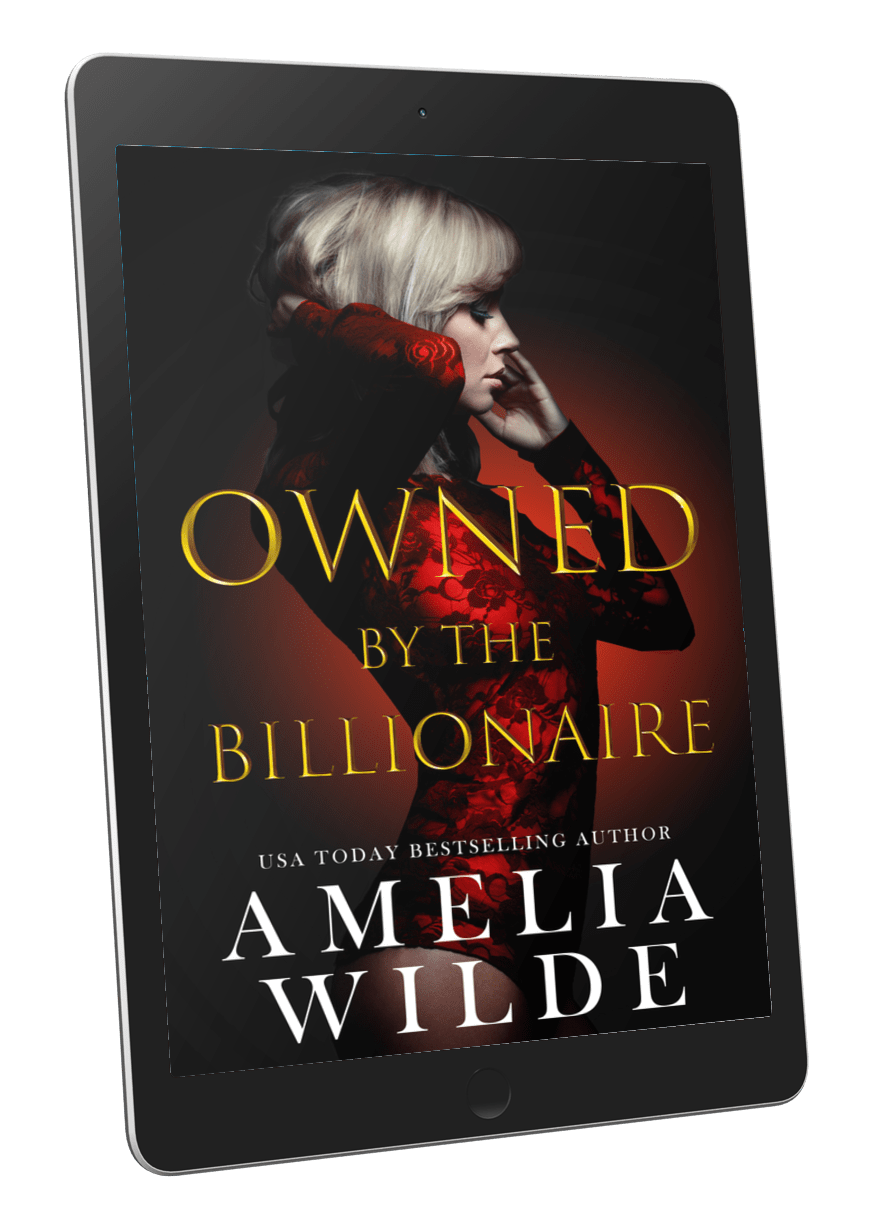