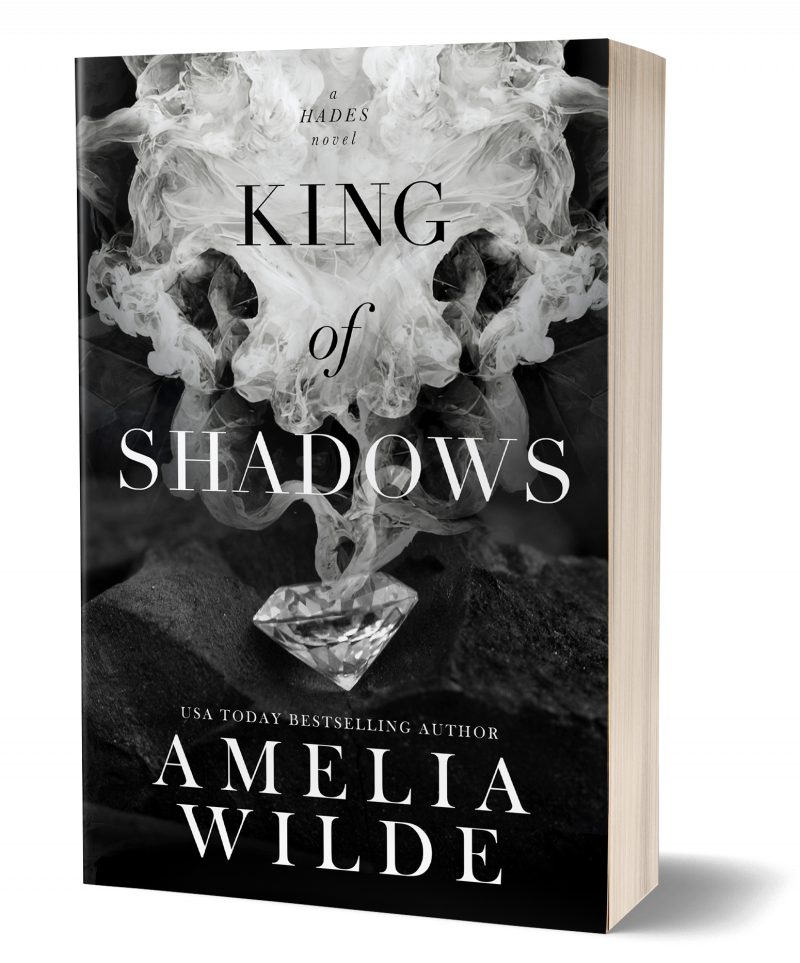 Persephone pokes her head out of the walk-in closet in our suite at Zeus’s house. I can’t so much as think that phrase without checking to see if I’ve stepped into a hallucination of some kind. It’s entirely possible, with a brain like mine. It could have been crushed to bits years ago, and I might not have noticed.

My summer queen’s face lights up at the sight of me. “Yes. You are doing this.”

“This? Here?” She comes to put her arm around my waist. Persephone looks beautiful dressed as a flower. Stunning. Radiant. As if she herself is a bloom that sprouted from the earth. She admires herself in the mirror, paying special attention to the crown of flowers on her curls. Admires me, too.

“Yes. Here is where I draw the line. If I go down there—”

“Everyone will love it.”

“If I go down there, everyone will die.”

She pouts at me in the mirror, her silver eyes still bright. “Because you’ll kill them? Hades. It’s a Halloween party. You can’t murder the guests.”

“Because they’ll laugh so hard that they’ll suffocate.”

Persephone looks me up and down, her eyes going dark. “They won’t laugh.”

“Yes, they fucking will.”

“Who’s going to notice you when Poseidon is dressed as a siren?”

I glare at her in the mirror, and she just laughs.

She laughs at me.

“See? Even you, summer queen.”

A small voice calls from the next room, but Persephone puts her hand on my arm before I can go. “Keep it on for one more minute, and then if you really hate it, you can just go as yourself.”

“Because I’m such a terror.”

“Yes,” she whispers, then goes into Daisy’s room.

I close my eyes to shut out the sight of myself in the mirror and listen to them. Mama. Mama. Look at me. Persephone laughs. Aren’t you the most perfect daisy in the whole world? Then: Mama, I want to put on my dress. Mama. My dress.

Then various squeals and giggles.

“Ready?” Persephone says from the door.

I open my eyes to find them waiting in the doorway.

Daisy wears a dress that matches Persephone’s, a bloom of color that looks like my summer queen coaxed it from the earth herself. But her crown isn’t just flowers. There are sunbeams, too. Somehow, Persephone’s made them shine.

My daughter’s three-year-old face breaks into a grin. “I’m the sun, Daddy! I’m a flower!”

She nearly throws herself out of Persephone’s arms in her attempts to reach me. My summer queen makes a carefully neutral face as she brings Daisy over and lets her leap into my arms.

Daisy stares up at the ridiculous thing I’ve been forced to wear on my head with an expression of pure, unadulterated awe. Two chubby hands reach up to touch it, very, very gently.

“Of course you’re the sun, sweet pea.” I look at Persephone over Daisy’s shoulder. “You did this on purpose.”

“Yes. I did.” Persephone comes to stand close to us, then reaches up to adjust Daisy’s crown. “But look at her.” She presses her face close to Daisy’s. “Can you stand how perfect she is?”

Daisy glares at me. It’s my own face in miniature. “Yes, Daddy.”

I glare back. “Do you even know what you’re talking about?”

She shrieks, dissolving into giggles.

“Bring that baby down here!” Poseidon shouts from elsewhere, probably the bottom of the stairs. “I want to see her costume.”

“Hades is coming, too,” Persephone calls back.

“I know.” Poseidon sounds very strange, and then the boom of his laughter fills up every spare inch of the house. “The sun. Jesus Christ. He’s never going to come to one of these again. Zeus! Get over here. We only have two minutes to live.”

I catch Persephone’s chin in my hand. “I love you, summer queen.”

“I love you too. Also, that sounded very threatening.”

“I’m glad. It’s all I have left, wearing this.” Persephone slips her hand into mine, and Daisy hugs my neck.

In fact, I have everything. The sun and the moon and the whole world in my arms.

It makes up for the costume.